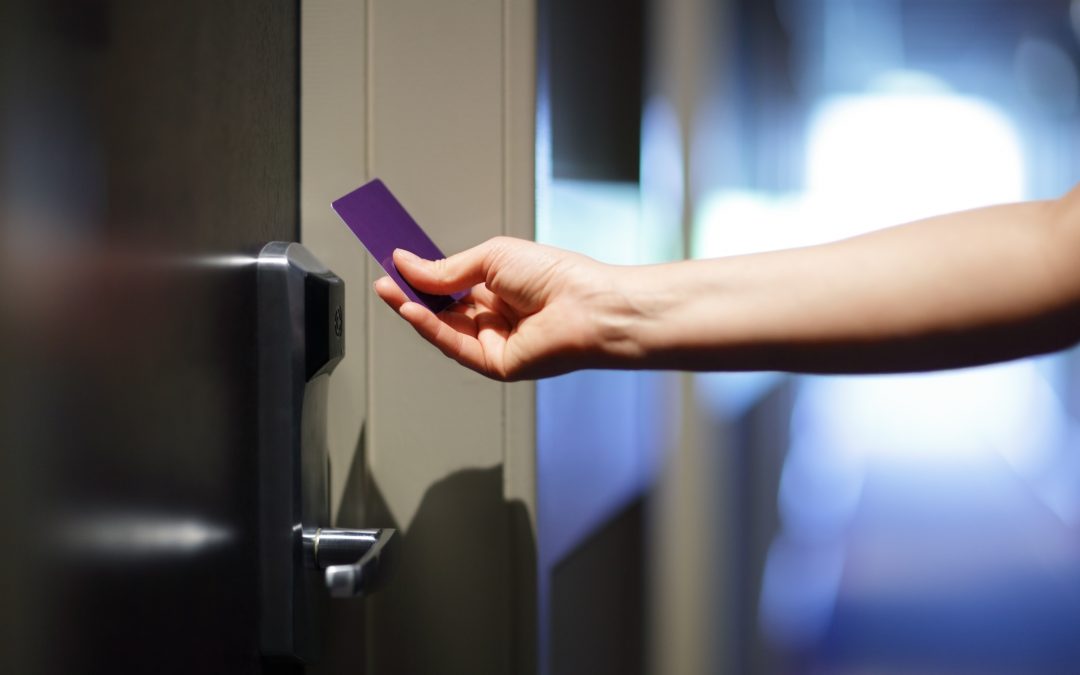 ​When it comes to being able to control access to your building, this is considered by many to be perhaps one of the most critical factors involving commercial security. Surveillance cameras are always a great tool; however, they can only do so much, and at some point or another, you will require an access control system in order to lock and unlock your doors whenever your employees need to enter and exit the building.

It’s important to keep in mind that all types of door access systems work in a similar manner – credentials are presented to the reader prior to the data being sent to a controller in order to be authorized. The door is then unlocked only if the credentials themselves match a set that is stored on the system’s whitelist. While these credentials can vary, key cards are the most common due to the fact that they are generally cheap to manufacture, as well as easy to manage, easy to secure, and simple to program.

Here are the four main types of key card entry systems that buildings typically use.

*One main type of key card entry system that buildings use is swipe cards. This involves magnetic stripe cards being swiped across a magnetic reader in order to transfer information, similar to the same type of technology that can be found in a traditional credit card. The black stripe on the card contains time polarized magnets in multiple tracks, which creates a longer data set as opposed to those held within a Wiegand card. When the swipe card is used, the magnets will then create varying amounts of voltage across a magnetic read head, which measures the voltage itself before converting it to a binary credential. It’s important to note that both magnetic fields and general wear and tear are able to corrupt the data stripe, which means that even if you still have your card, this can still cause you to lose your credentials.

*Another main type of key card entry system generally found within buildings is Wiegand cards. These were some of the first key cards developed for a key card system and were named after their inventor, John R. Wiegand. This specific card utilizes two separate parallel lines of short Wiegand wires in order to store binary data in magnetic polarity, and whenever the card itself goes through the reader, the wires end up registering as ones, while blank spots end up registering as zeroes. From there, the Wiegand number, which is always unique, is then transferred to the controller in order to be authenticated. Furthermore, Wiegand cards are unable to be either erased or reprogrammed by magnetic fields. Furthermore, they are also considered to be much more durable than any other key cards due to the fact that they do not contain a microchip or any other kind of breakable component. These cards are rarely used outside of legacy systems these days; however, the protocol itself remains the overall standard interface in order to help connect readers and scanners to controllers.

*One other main type of key card entry system that can be found in buildings is smart cards, which generally means High-Frequency RFID cards that utilize Near-Field Communications to help transmit data. This system is typically found in contactless payment systems. Although they still use passive induction for power, smart cards still have additional storage capacity than 125kHz cards, meaning that they are able to encrypt their data while also storing it. Additionally, they are also more secure and cannot be as easily copied as prox cards.

*Another main type of key card entry system located in buildings is prox cards, also commonly referred to as Radio Frequency Identification, or RFID. The card itself, which uses a low frequency of 125kHz to communicate with the reader, can be powered either by a small-sized lithium battery or passively by the reader itself. Whenever the card is close enough, its antenna of coiled wire is able to store enough energy so that it can send the ID on the chip to the reader. Unfortunately, they are also vulnerable to being either rewritten or copied; however, the only way this can be done is if you are within the read radius of one foot.